Home News If I were Mayor… 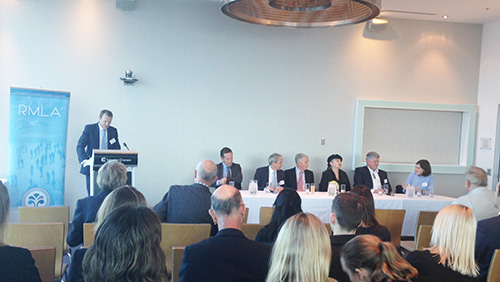 If I were Mayor…

RMLA members gathered in Simpson Grierson’s Auckland offices on September 01 to hear from a selection of this year’s Auckland Mayoral candidates.

“What, in your view, is the greatest challenge in implementing the Unitary Plan?”, was the question put to this year’s Auckland Mayoral Candidates during a Panel Session hosted by Simpson Grierson and RMLA Auckland.

Over the course of an hour, six candidates, including Penny Bright, David Hay, Phil Goff, John Palino, Chloe Swarbrick and Mark Thomas addressed the Auckland Unitary Plan; the importance of a relationship with central government and whether they have what it takes to successfully manage such a relationship; and the distinction between affordability and liveability. Here’s what they had to say…

With six years under his belt working for Auckland Council, complementing 25 years in the private sector, Mark Thomas, Deputy Chair of Orakei Local board, outlined his plan to make Auckland Council more efficient and affordable, and to drive progress by focussing on the issues he says are holding Auckland back – namely, transport and the infrastructure development needed to support growth.

He stressed that, while the Unitary Plan is no silver bullet for delivering housing affordability, he is “determined to work with what we’ve got”.

On the topic of liveability vs. affordability, he notes “In our rush to achieve liveability, we took our eye off affordability”. He argues that rather than spending tens of millions on waterparks and Wynyard Quarter-type projects, we need to “spread our focus”.

Unitary Plan the starting, not the end point

“The Unitary Plan is a zoning map; not a growth plan”, stressed Mayoral candidate John Palino, noting that he has his own plan written up and ready for deployment.

Mr Palino’s overriding concern is that Auckland’s growth currently favours intensification of suburbs, at the expense of communities. He warns that intensifying suburbs merely creates unsustainable debt, traffic congestion, overloaded schools, pressure on emergency services and the eventual breakdown of communities due to longer commuting times and unaffordable housing.

Hailing from New York, Mr Palino referenced Los Angeles as an example of why suburban intensification is not the way forward. “What you’re left with is a bankrupt city and a sprawling spider web with no centre. People need to be located where they can work, live and play”.

He argues that liveability hinges on affordability. “Families are divided due to affordability – grandparents moving out because they can’t afford to live close to the centre; parents are stuck in traffic and spending less time with kids due to long commutes and traffic congestion.” In this respect, he says making people central to the plan is key to Auckland’s liveability.

He notes that today’s problems arise from Auckland’s stunning success at promoting itself as a Liveable City, consequently attracting an influx of people that it simply can’t accommodate. He flags infrastructure, housing and transport as key focus areas, as well as a need to make the Auckland Council more accountable and transparent.

On the question of affordability and liveability, Mr Goff stresses the need for development without compromising heritage and the natural environment; for an alterative to traffic congestion through public transport; and for making Auckland an affordable city for those on below-average incomes.

Penny Bright dismisses the Unitary Plan as lunacy, arguing that growth should not take place in Auckland alone; rather the focus should be on national growth supported by a regional strategy. In its current state, she describes the Unitary Plan as a “corrupt corporate coup” beneficial only to the “wealthy 1%”.

Ms Bright described liveability as referring to the “place where you live”.

“I have no intention of rewriting the PAUP or the Auckland Plan”, stresses David Hay. The job of Mayor is to look at plans that have been written and consider how they get taken forward, he says.

His objective is to reduce Auckland’s net emissions to zero by 2060, if not sooner. A key lever to achieving this is mass rapid transport. His vision for Auckland’s transport is a heavy rail backbone with light rail, cycle paths, and walkways structured around the railway backbone.

Climate change adaptation is also a priority consideration. “Sea level rise will be 1.45 metres by the end of the century: we need to start planning now”, he says. This involves identifying the land parcels that will be the least and most affected, understanding what parts of land can be defended; what we let go of, and the infrastructure that we need to let go of, says Mr Hay.

Reducing compliance-cost is his third priority. This entails central government providing “clear, crisp and flexible direction, rather than the micro-management and cost-inducing legislation under which local government currently labours”.

He notes that affordability underpins liveability. In this respect, the overheated housing market should be a priority, with the aim of a short, sharp reduction in housing costs, as opposed to a slow and gradual cost reduction.

“I’m a big fan of the Unitary Plan – it sets a framework. However, it is just a plan – it won’t happen all by itself”, says Chloe Swarbrick.

To ensure that the plan delivers, she recommends effective governance for at least the next 30 years, coupled with reform of what she describes as an opaque and convoluted consenting process that yields prohibitive costs arising from double handling of fees and general inefficiency.

“We need to ensure that houses are actually getting built”, she adds, noting that land bankers are free-riding the benefits arising from investments within local communities to improve their own homes. “Land bankers and speculators are holding us to ransom, investing in and holding onto property without adding any value.”

To this end, she argues that rates reform is needed. In the face of a housing crisis, “we are currently taxing people for building! Rates need to be based on square meterage, with a tax on land that is being held and not developed”, she says.

RMLA thanks the Mayoral Candidates for their participation in the Panel Session and wishes them the best of luck in the forthcoming elections.