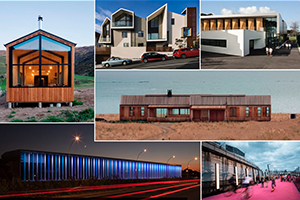 27 projects, ranging from a colourful cycleway to a Māori immersion school, were singled out for excellence at this year’s New Zealand Architecture Awards, announced in Wellington on Friday 11 November.

A cross-section of buildings and structures won honours in the leading architectural awards programme, which recognises the best work across all the types of projects designed by New Zealand’s architects.

“All of the award-winners are highly impressive projects,” van der Lingen said. “They go above competence to reach excellence. They set the benchmark for architectural achievement in New Zealand.”

Among the winning projects, the LightPath / Canada Street Bridge received its New Zealand Architecture Award in the Planning and Urban Design category. In this project, the jury said, “a redundant section of motorway has been artfully combined with an elegant new bridge to produce an inspiring piece of urban design with enormous public appeal.” The jury said “the stretch of cycleway and walkway signals, with its pink path and coloured lighting, the profound changes that are beginning to occur in Auckland’s transport planning.”

The Bus Interchange, designed by Architectus, is the first Christchurch anchor project to be completed and, the jury said, “sets an excellent precedent in its provision of a high quality public facility.”

In Auckland Devonport Library, designed by Athfield Architects, has quickly become a valued community asset. The jury said the library’s “generous and engaging spaces, and its combination of relaxed ambience and busy occupation, lend it an admirable vitality.”

Jasmax’s APL Factory in Hamilton was also singled out for providing a spacious, light-filled working environment that is already an architectural landmark. The jury noted: “the factory’s long roadside elevation is a fine addition to the streetscape and wider urban scene.”

An eco-friendly design caught the judges’ attention this year. Aro Hā Wellness Retreat, a Glenorchy eco-resort designed by Tennent Brown Architects to be as sustainable as possible in terms of energy use and food production, was praised for its “sculpted forms to the mountainous landscape around Lake Wakitipu”.

Another business-oriented project to win a New Zealand Architecture Award in the hospitality and retail category, was Fortieth & Hurstmere, an arcade of cafés and restaurants in Takapuna on Auckland’s north shore designed by McKinney + Windeatt Architects. “From nothing, the architect has produced a result that’s quite something” the jury said of a project “that saw an unprepossessing building excavated to yield a lively internal laneway that brings depth and diversity to a shopping centre surrounded by carparking and traffic.”

The Architecture Awards housing categories included nine winners. Zavos Corner won its New Zealand Architecture Award in the Multi-unit category, as did the Mary Potter Apartments in St Albans, Christchurch, designed by Warren and Mahoney Architects. “The 12 Mary Potter market-rental units for elderly residents have been integrated into an existing community housing project in a manner, the jury said, “shows deep respect for the social mission of the client and the needs of residents.”

Six new standalone houses also received New Zealand Architecture Awards, including the K Valley House, sited in countryside near Thames. Recycled materials and fittings have been used extensively in the building. “The commitment to a rural idiom is clearly signalled by the rusted corrugated iron sheets on the exterior,” the jury said. “Inside, it is clear that this is a sophisticated piece of work, as comfortable as a cosy retreat should be, and as confident as an inspiring site demands.”

Two projects, both designed by Jasmax, received awards in the Interior category. New Zealand Post House in Wellington, is a “concrete brute of a building that has been revitalised with quirky pods and ‘village green’ kiosks, and an internal street through the ground floor that is a welcome alternative thoroughfare to windblown Waterloo Quay.”

To see the full list of winners and to view the gallery of winning architectural designs, please click here.