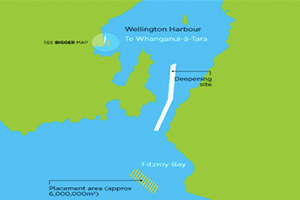 CentrePort’s plans to dredge more than 6 million cubic metres of seabed sediment from Wellington Harbour have been impacted by last month’s Kaikoura earthquake, according to a report by The Dominion Post. The ports plans are on hold as it rectifies damage to listed heritage buildings that currently compromise trade routes.

The dredging project would enable Wellington to receive much larger container ships capable of carrying more than 6000 containers. Ships of this size will soon be heading to New Zealand, according to the port.

The port had applied for resource consents to deepen a 7-kilometre channel to depths of between 16.5m and 17.2m below chart datum, and to deepen the northern approach and berth at the Thorndon Container Wharf to a depth of up to 15.2m. This would allow for passage of ships with draughts of up to 14.5metres.

The project has raised concerns over possible environmental impacts on the underlying Waiwhetu aquifer. Locals are also concerned about the impact on wave action arising from the relocation of 6.27 million cubic metres of sediment to Fitzroy Bay. The dredging works are likely to reduce wave height by 30% along the Eastbourne Coast, a popular surf spot, and in Wellington Harbour/ Te Whanganui a Tara.

However, the project has been put on hold while the company addresses damage from the magnitude 7.8 quake on Wellington’s waterfront – in particular, Shed 35, a listed heritage building under the Wellington city district plan.

CentrePort has commenced urgent work to contain asbestos on the roof of the vacant cargo store. Shed 35 is susceptible to further damage or collapse, according to the Port. It is impacting on the Bluebridge ferry operation, which is a key strategic freight link and critical lifeline facility in the event of a major earthquake in the region.

“We have talked to WorkSafe and Wellington City Council about our plans to control asbestos on the roof, and the future of the severely damaged building,” Chief Executive Derek Nind said in a press release.

Work is expected to involve a large crane to reach the roof and spray a compound to bond the asbestos panels damaged in the earthquake.

Mr Nind said the Port had talked to Heritage New Zealand about the fate of the 1915 warehouse. Wellington City Council Planning Manager Warren Ulusele says it has been a “tough but necessary call” to utilise the Resource Management Act emergency provisions in this case. “We’ll do as much as possible to retain the city’s heritage, but in this case we have a seriously damaged building in danger of collapse.

“This is a unique set of circumstances relating to a life-line utility, which allow emergency provisions to apply, which would not be applicable in other circumstances across the city.” Mr Nind added that the company would continue working with stakeholders on the process, while also starting demolition of the former NZRU building, which had been classified as earthquake prone before the Kaikoura earthquake.