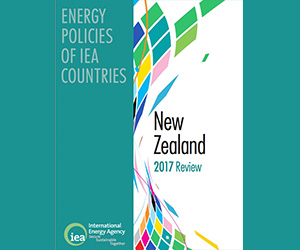 IEA: NZ’s energy and carbon pricing policies “not sufficient” to decarbonise beyond 2030

The report’s authors flag several major challenges faced by New Zealand, including an increase in geothermal energy generation, sustained heavy use of lignite coal by the agricultural sector, and the ramp up of electrified transport.

The report notes that, while geothermal has doubled its share of the energy mix, the related (and in some reservoirs, significant) GHG emissions will present a new set of challenges. The report also notes its concern that the NZ Emissions Trading Scheme’s current carbon prices do not encourage biomass co-firing or the switch to solid biomass in agriculture, despite the agricultural sector’s continued, heavy reliance on coal use (‘dirty’ lignite) for process heat.

Looking ahead to 2030, the report’s authors note that New Zealand’s current energy efficiency targets and carbon price policies “are not sufficient”, explaining that the government has yet to adopt additional policies required for the investment in decarbonising the economy up to 2030 and beyond, towards 2050.

New technology choices in the energy system (solar PV, electric vehicles, smart grids and storage) may also have implications for electricity demand and system operation, say the authors. As for non-electric vehicles, the authors warn that a carbon price alone is unlikely to be the sole driver of the energy sector transformation, notably in transport, given that half the light fleet consists of vehicles imported second-hand and there are no blending requirements for alternative fuels nor vehicle fuel economy or emission standards outside vehicle exhaust emission rules.

Among the report’s primary recommendations is that decarbonisation of New Zealand’s economy could be achieved through an enhanced New Zealand Emission Trading Scheme and sectoral energy action plans, with performance-based targets aligned to energy and climate goals, supported by a long-term and stable framework for energy investments.

The authors recommend that New Zealand adapt its energy market design for the integration of greater shares of variable renewable electricity, including wind and solar PV; and that it conduct a systematic and detailed review of likely scenarios for a portfolio of wind, solar and geothermal resources in order to assess impacts on grid and system reliability.

They also advise the government to direct the New Zealand Productivity Commission to review the electricity distribution sector and identify opportunities for improving the sector’s productivity, flexibility and capacity to respond to the challenges posed by the potential transformation of the sector.