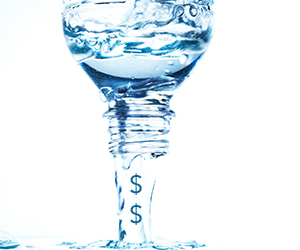 A petition calling for legislation to regulate the bottling and export of New Zealand’s fresh water has been dismissed by Minister Nick Smith as “irrelevant”.

His comment came in response to protests held outside 21 council offices around the country and a petition presented to parliament bearing more than 15,000 signatures, calling for a moratorium on the export of bottled water until it was made compulsory for all resource consent applications to take water for bottling, to be publicly notified.

Currently there are there are 74 bottling plants across the country with permits to take New Zealand’s water to bottle and sell overseas. Councils such as Ashburton District Council and the South Waikato District Council have previously sold rights to companies to extract water from aquifers at a cost of about one millionth of a cent per litre, according to Councillor Dave Macpherson, Hamilton District Council.

Minister Smith dismissed the signatories’ concerns as “irrelevant” to the important discussion on better managing New Zealand’s freshwater resources. “We use a million times more water for irrigation, town water supply and industry than that for bottled export. Bottled water exports are such a small fraction that it is a distraction to the important debate about how New Zealand better manages its freshwater resources,” he said in a statement.

Jen Branje, founder of Bung the Bore, the organisation behind the petition, noted that the Minister has based his argument on global water figures, rather than referencing the amount of potable water available in New Zealand.

“Our water ways are unswimmable, our groundwater is full of nitrates, yet the pure pristine water on the West Coast will be pumped off into a ship and sent off overseas for private profit”, she recently told RadioNZ. Ms Brantje was directly referring to Okuru Enterprise Limited, which applied for a resource consent last June to redirect up to 800 litres a second from Tuning Fork Creek, near Mt. Aspiring, to an export facility at Neils Beach in Jackson Bay.

“In many parts of our country people are struggling to access clean, safe water yet at the same time billions of litres are being given away to private companies for nothing,” she added.