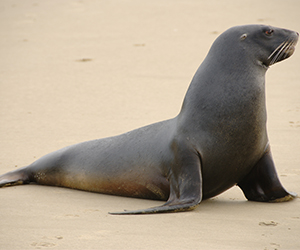 A new Threat Management Plan designed to protect endangered New Zealand sea lions, was released on Monday.  The plan is supported by a government funding package of $2.8 million to help mitigate threats to and aid recovery of the sea lion population. But some groups are concerned that the plan does not go far enough to protect the species.

With disease and commercial fishing posing the greatest threats for sea lions, management of commercial fishing interactions with sea lions have been made a key focus by MPI. Another key action of the Plan will be to carry out more research into the disease Klebsiella pneumoniae, and work out ways of mitigating the effects of this disease.

However, local environment NGO, Forest & Bird, says the Plan still lacks specific actions that address the main human threat to sea lions:  the squid trawling industry. Multiple threats have caused the  decline in the sea lion population, says the NGO, including drowning in squid nets, disease, and competition for squid.

The New Zealand sea lion/rāpoka Threat Management Plan will continue to involve partnership with Ngāi Tahu as a Treaty Partner and stakeholder groups. New mechanisms to weave mātauranga Māori throughout each workstream will be developed in partnership with whānau, hapū and iwi, something which has been absent from recovery plans in the past.

A New Zealand sea lion/rāpoka Forum and an Advisory Group have been established to aid in prioritisation of the annual work plan to support the NZSL TMP.