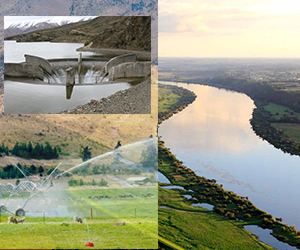 Two irrigation projects in South Canterbury and Central Otago have been awarded a total of NZ$1.1 million in government funding.

The project will build on the wide range research carried out in the broader South Canterbury region over recent years, and look at the potential viability of the scheme in terms of water availability, infrastructure options and commercial feasibility.

Crown Irrigation Investments also announced $815,000 funding into the Manuherikia Water Project in Central Otago, which will allow a Falls Dam proposal to move forward. This will enable six independent irrigation companies in the Manuherikia valley to amalgamate under a single legal entity, WaterCo Limited, with a view to expanding the current area of farmland and orchards under irrigation.

Three options have been investigated: raising the existing Falls Dam by about 6m, or building a new dam, which would be either 12m-15m or 20m higher than the existing dam, but a new proposal was also possible.

Forest & Bird warns that even the low dam proposal, raising the level by about 6m, would probably flood the breeding habitat of threatened black-billed gulls and possibly the breeding area of the nationally endangered black-fronted tern.

More information on the projects can be found here: www.mpi.govt.nz/ags