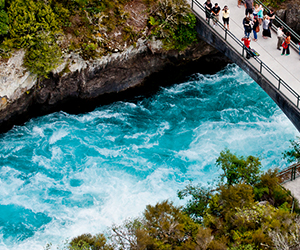 Dame Nganeko was a courageous leader.  As Huakina’s lawyer at the time, Justice Sian Elias, said recently: “Nganeko was never one to rest on achievements, but to turn to what was left to be done.  She never compromised on what was right.”

Thanks to Dame Nganeko and others who have made courageous steps forward in this space, the whole approach to water management has changed over the last 30 years. Certainly in the Waikato, we’ve seen major changes in the way we develop policy – changes which have required courage and leadership.

Decision makers today take into account concepts such as mauri (life force), mana (prestige), taonga tuku iho (treasures) and te mana o te wai (the mana of water) in the context of freshwater management.  We now operate through co-governance and co-management frameworks, involving iwi and others in decision making processes.

Healthy Rivers/Wai Ora: Proposed Plan Change 1 (which addresses water quality in the Waipa and Waikato rivers) for example, has made a mark in that it’s been a proactive and progressive move towards a more collaborative and holistic approach to policy development.

It signalled a step-change in policy development, empowering communities to own the problems and solutions to improve water quality in our Waipa and Waikato rivers. Based on a Treaty partnership approach, it allowed the community (represented by a collaborative stakeholder group), supported by independent technical leadership, to hold the policy pen.

This was a completely new process for our council and one which required a leap of faith and trust in our communities. It hasn’t been without challenges as we continue to navigate through the process, but we’ve seen real success so far. A proposed plan change was notified in late 2016.  Waikato Regional Council’s role has been to support the process, becoming a submitter on the plan change like everyone else.

Our recently released Freshwater Strategy is another example of progressive thinking and courage in pushing for legislative change.

This first-of-its-kind strategy addresses the significant pressures on water availability and quantity in the region over the next 50 years and beyond by attempting to influencing law change. Developed after extensive consultation with iwi and regional stakeholders, it provides a roadmap for moving from a regulatory approach to one where decision makers have access to a wider range of policy levers – including economic and market instruments – to protect our waterways by allocating what’s available more effectively.

We’re the first local authority to develop such a strategy and we’re fully aware of the mammoth task ahead. However, the strategy is providing leadership in the freshwater debate and a strong Waikato voice that will be crucial in influencing central government. The issues we’re grappling with aren’t unique to the Waikato and the solutions the strategy recommends can be scaled nationally.

We know we can’t achieve the region’s goals on our own, and working with others is essential to making a difference for our future. This isn’t always going to be easy and there will always be a contest of values with any resource management issue, however we need to find common ground and work collaboratively to be successful.

As local authorities, we are in the best position to work with our communities to find solutions to complex issues. The issues that we face aren’t straight forward, particularly in the case of fresh water. They’re complex and interconnected, inherited from many years of past activities, the effects of which will be seen for decades to come.

Addressing these issues and setting ourselves up for a better future requires courage. It requires leadership, collaboration and new ways of thinking. But like Dame Nganeko Minhinnick, we can’t sit back and be complacent, we must be proactive and often this means questioning the current frameworks within which we operate and pushing for change.