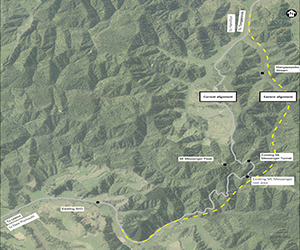 Transport Minister Simon Bridges has announced the selected option for the Mount Messenger Bypass in Taranaki following a decision by the NZ Transport Agency Board last Friday.

An eastern alignment has been selected, which will bypass the existing Mount Messenger and provide a more direct and efficient route. This alignment was known as Option C during public consultation.

The eastern alignment option was chosen on the grounds of safety, resilience, travel time benefits and avoidance of geologically unstable areas. It was also the preferred option of both the road transport sector and the Department of Conservation.

The project is estimated to cost $200 million and will be funded through the Government’s Accelerated Regional Roading Programme and National Land Transport Fund.

The project is expected to be complete by 2021.