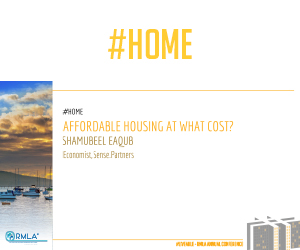 Shamubeel Eaqub Economist Sense.Partners.  Shamubeel Eaqub takes a top-down approach to tackling the thorny issues of densification, liveability, affordability and legislative frameworks. Rather than focusing on the ‘how’, he focusses on the ‘what’. He places emphasis on establishing an agreed outcome then latterly figuring out which policy tools are best suited to delivering it – whether it be the RMA, the Unitary Plan, or some other form of legislative framework.

Shamubeel Eaqub is an experienced economist who makes economics easy. He is also an author, media commentator and a thought leading public speaker. He has over a decade of experience as an economist in Wellington, Melbourne and Auckland in leading international banks and consultancy. Shamubeel is a partner as Sense. Partners – a boutique economic consultancy. He is on various boards of charities and commercial firms.  He writes books in his own time on issues that matter to New Zealand and gives voice to the unheard. He lives in Auckland with his wife and son. He grew up in Canterbury and holds a BCOM with Honours in Economics from Lincoln University.