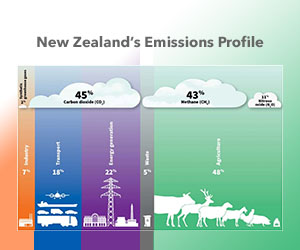 A report published today by the Ministry for the Environment reveals the extent to which New Zealand has dragged its heels on reducing per capital emissions – tailpipe and agricultural emissions in particular.

The report, ‘Our Atmosphere and Climate’, reveals that New Zealand accounts for a disproportionately high per capita level of carbon emissions, representing the fifth-highest level of emissions per person of the 35 countries in the Organisation for Economic Cooperation and Development (OECD, 2017), despite accounting for only 0.17 of global emissions.

New Zealand’s tailpipe (or, roadside) emissions, have increased by a staggering 78% since 1990, making a compelling case for increased investment in public transport and EV infrastructure.

Net emissions rose 64 percent, indicating that a recent, rapid increase in logging and land-use change is undermining New Zealand’s capacity to offset emissions against its planted forest carbon sinks. Logging is outstripping afforestation: according to the report, from 2006 to 2015, there was about twice as much deforestation (120,115 hectares) as afforestation (64,207 hectares).

Given its comparatively fast growth-rate, afforestation is predominantly in the form of exotic (i.e. non-native pine) forests, which now account for two million hectares. Pine forests store just under half as much carbon per hectare as New Zealand’s mature native forests. The report notes that much of the exotic pine forest coverage is nearing maturity and is likely to be harvested in the next few years. This will release carbon back into the atmosphere, further hampering New Zealand’s efforts to meet its emission-reduction targets.