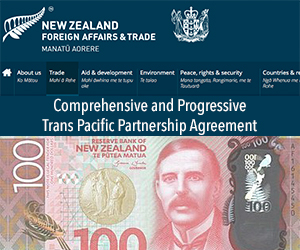 New Zealand’s Green Party is among several voices expressing disappointment over the newly proposed Comprehensive and Progressive Agreement for the Trans-Pacific Partnership (CPTPP) deal, on the grounds that ISDS provisions continue to threaten democracy and the environment.

Commenting on the revised Trans Pacific Partnership Agreement, Green Party trade spokesperson Golriz Ghahraman, noted: “ISDS mechanisms are a particular threat to environmental protections, with 85% of ISDS cases being brought by corporations focused on exploiting the environment and natural resources”.

Under the rebranded deal, there is no real change to the pro-investor rules or the core investor-state dispute settlement (ISDS) mechanism. “A provision that would allow foreign investors to use the TPPA’s ISDS mechanism to enforce contracts for infrastructure or natural resources has been suspended, as has the ability to challenge measures affecting certain financial investments. But investors can still use ISDS to enforce their special rights under the investment chapter, and the delegitimised ISDS process remains intact”,  explains University of Auckland Law Professor, Jane Kelsey.

The Council of Trade Unions has also expressed concern that the agreement was still not good enough on labour laws or transparency.

On 9-10 November 2017 in Da Nang, Viet Nam, Trade Ministers from eleven countries agreed the legal instrument for the Comprehensive and Progressive Agreement for the Trans-Pacific Partnership (CPTPP). An outline of the Agreement has since been issued. With no agreed timeline in place for the next meeting of the CPTPP parties, the new government now has the space to conduct an in-depth consultation on its proposal to adopt the deal.

CPTPP incorporates the original TPP Agreement, with the exception of several technical provisions. These provisions deal with legal issues, such as when the Agreement becomes legally binding and how new countries can join.

The Ministers also agreed to a list of Suspended Provisions [PDF, 62 KB]  contained in the original TPP.

In addition, Ministers agreed to a list of four specific items contained in the ‘Items to be Finalised by the Date of Signature.’ These are included at the end of the List of Suspended Provisions.

To read the outline of the new CPTPP agreement please click here.