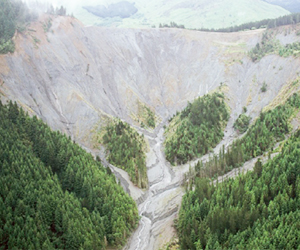 Gisborne district landowners now have access to a NZ$7.4 million erosion control funding pot. Poor soil quality and increasing frequency of adverse weather events has left Gisborne particularly vulnerable to erosion, with twenty-six per cent of the district’s land now susceptible to severe erosion, compared to 8 per cent of land around the rest of the country.

The latest round of funding derives from the Ministry for Primary Industries’ Erosion Control Funding Programme and will benefit 32 properties, representing 4,893 hectares. The funding will allow landowners to plant trees or retire land to regenerate native bush in order to return the land to a productive and sustainable state.

Soil erosion costs New Zealand up to NZ$200 million annually through loss of productive capacity and damage to infrastructure and waterways. Under the erosion programme, 42,000 hectares of land in Gisborne has been remediated so far and, with this latest funding, a further 4,893 hectares will be remediated.

The incoming Government has committed to seeing 1 billion trees over the next 10 years, which – among other benefits – will help enormously with the issue of eroding land.

Since 1992, when the fund was established, $49 million has been provided to the Gisborne district.