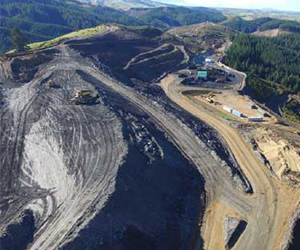 Bathurst Coal, an arm of ASX-listed Bathurst Resources, has been fined by Environment Canterbury for 14 counts of unauthorised run-off from its open cast mine at Coalgate, Canterbury.

Bathurst Coal Limited was issued 14 infringement notices for unconsented sediment runoff from its Canterbury Coal mine at Bush Gully Road, Coalgate, into the Waianiwaniwa River, which ultimately flows into Te Waihora/Lake Ellesmere.

Canterbury Coal, produces at least 100,000 tonnes a year of low sulphur coal for dairy factories. To meet demand from the dairy industry, the mine is scaling up production to 170,000 tonnes of coal a year by introducing new equipment to boost its processing capacities. It is also undertaking explorative drilling of potential new fields at the site.

The resulting development, which has been underway since autumn this year, created significant areas of exposed soil. According to Ecan, sediment and erosion controls were not fully established on site before the redevelopment.

Selwyn Waihora zone manager Michaela Rees said the mine had breached the Resource Management Act 1991, and in doing so potentially affected the habitat of the region’s most threatened fish species – the Canterbury mudfish – which is also taonga to Ngāi Tahu.

“This left the waterways or streams vulnerable as there was inadequate protection in place to manage the risk of sediment run-off during a large rainfall event, of which there have been several this year,” she said.

After each heavy rainfall during winter 2017, Environment Canterbury staff went to the mine to check whether the company was complying with its consent conditions.  They also checked whether the company had completed establishing sediment controls, including fencing, staged ponds and planting, to manage the areas exposed during development.

“If the company fails to comply again, we won’t hesitate to escalate our enforcement response if necessary – our waterways must be protected,” noted Ms Rees.