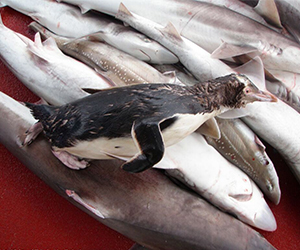 The disappearance of nearly 50% of the breeding population of the endangered penguin species, hoiho, on the island sanctuary of Whenua Hou (Codfish Island) is likely due to mass drownings in commercial set nets, prompting calls for tighter regulation of the fishing practice.

New Zealand NGO Forest & Bird is calling on the Government to urgently bring together the fishing industry, Ngāi Tahu, the Department of Conservation, the Ministry of Primary Industries (MPI), community organisations and scientists to agree an immediate set of actions to eliminate the risks from set netting in the penguins’ feeding areas.

Hoiho are the world’s most endangered penguin species, whose breeding numbers in the South Island have been tumbling annually since 2005. This year, alongside continued decline across all their mainland nesting colonies, a scientific survey has shown that nearly half the birds from the sanctuary island Whenua Hou have disappeared.

“This bird is so special that it appears on New Zealand’s five dollar note. The critical information about the Whenua Hou catastrophe should not have been held back from the public. Instead we need honest conversation with New Zealanders spelling out the actions that will be taken to prevent it happening again”, said Forest & Bird Chief Executive Kevin Hague.

Unlike previous years where disease and high temperatures caused deaths on land, this year birds have disappeared at sea. There is an active set net fishery within the penguins’ Whenua Hou foraging ground, and the indications are that nearly half the Whenua Hou hoiho population has been drowned in one or more of these nets, said the NGO in a press release.

Forest & Bird is calling on the MPI to be more proactive by getting more of their observers onto set net vessels and to prioritise putting cameras on set netting boats. It is also calling for a Recovery Plan for hoiho to be written without further delay, and for a working group to be convened on managing threats to hoiho from the fishing industry.