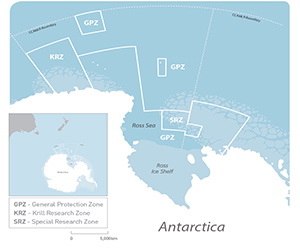 The Ross Sea region Marine Protected Area (MPA) came into effect on December 1st. The MPA is a joint New Zealand/United States initiative, and will protect 1.55 million square kilometres of the Southern Ocean.

The Southern Ocean is one of the world’s most pristine marine environments. It has an unbroken food-chain and still has a full suite of top-level predators such as whales, seals and penguins. The Ross Sea region MPA is six times the size of New Zealand.

The Marine Protected Area was agreed in October 2016 with the consensus of all 25 members of the Commission for the Conservation of Antarctic Marine Living Resources (CCAMLR).  CCAMLR was established by international convention in 1982 with the objective of conserving Antarctic marine life. A joint proposal for a marine protected area in the Ross Sea region was first made by New Zealand and the United States in 2012.