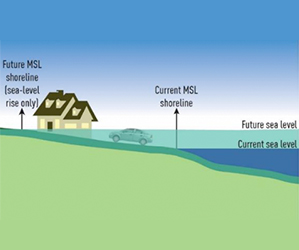 According to the report, 12,000 people and 4500 homes are particularly at risk from inundation due to sea level rise in Auckland’s Central Business District, eastern bays such as Mission Bay, Onehunga, Mangere Bridge, Devonport, and Helensville. Sea level rise also presents significant risk to the majority of Auckland’s coastal road, rail and water infrastructure, with Auckland’s east coast generally more vulnerable to storm surges than the west coast.

Waiheke Island, the southeast and northwest parts of the Auckland Region are projected to experience drier hotter weather, and a corresponding soil moisture deficit. This will reduce the rate of groundwater recharge, and will influence the growing rate of plants, harvest times, and the types of plants able to be grown in the Auckland Region.

Increases in extreme rainfall incidents will result in more slips and landslides on the east coast; and more sheet erosion in the south. Projections of higher weather pressure systems over the Pacific will result in less wind, but will yield an increase in the intensity of tropical cyclones.

Ongoing ocean acidification and nutrient loss will negatively impact the marine food web, while warmer temperatures will increase the number of air and water-borne disease vectors entering the region.

The report was commissioned by Auckland Council, Auckland Transport, Panuku Development and Watercare Services and was produced by the National Institute of Water and Atmospheric Research (NIWA).