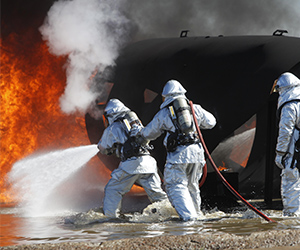 Nelson Airport caught out on prohibited firefighting foam use

The Environmental Protection Authority has served a Compliance Order on Nelson Airport, following an inspection of the airport’s fire-fighting facilities as part of EPA’s inquiry into fire-fighting foams.

The airport has been instructed to submit a plan to the EPA by Friday 16 March 2018, detailing steps that will be taken to ensure the foam is no longer used. The plan must also show how the foam will be safely stored and disposed of, to minimise harm to the environment.

“Our investigation is continuing, and the EPA is having samples of fire-fighting foams from other airports analysed,” EPA’s Chief Executive Dr Allan Freeth said.

PFOS (perfluorooctane sulfonic acid) is a member of a large family of chemicals known as PFAS. It has been used in fire-fighting foams since the 1960s.

Importing and manufacturing fire-fighting foams containing PFOS was prohibited in New Zealand in 2006, under the Fire-Fighting Chemicals Group Standard.

PFOS is harmful in the environment and may affect human health if there has been long-term exposure. Its use and management is restricted internationally under an agreement called the Stockholm Convention, as it is a persistent organic pollutant (POP).