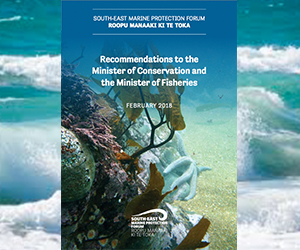 A final report by the South East Marine Protection Forum released on Wednesday, sets out two options to protect marine areas off the east coast of the South Island, for consideration by Fisheries Minister Stuart Nash and Conservation Minister Eugenie Sage. The recommendations were called for to ensure that New Zealand honours its international commitments to conserving at least 10% of its coastal and marine area by 2020.

The south-east coast was singled out for consideration, given that it is the only large coastal region in the country without any marine protected areas. Its spectacular coastline is home to some of New Zealand’s most endangered species such as the yellow-eyed penguin, northern royal albatross and New Zealand sea lion. It boasts rare, deep water bryozoan thickets that provide protection from predators for juvenile species, as well as giant kelp forests that provide habitat for many fish species.

The two options for networks of marine protected areas (MPAs) lie off the coast from Timaru in South Canterbury, to Waipapa Point in Southland. The Forum consulted in late 2016 with the public, industry and stakeholders on 20 sites for possible inclusion in a network of marine protected areas. More than 2,800 submissions were received during public consultation.

Network 2 covers 366 km2 of the Forum region, includes 10 of the 22 coastal habitats, no estuarine habitats and two biogenic habitats.

The Forum’s report provides detailed recommendations and explains the broader cultural and customary contexts of the marine habitats, as well as the economic, social and environmental considerations it took into account. The Ministers will now work through the next steps, which involves consultation with colleagues and agencies.

The South East Marine Protection Forum, chaired by Maree Baker-Galloway, Partner, Anderson Lloyd, is an independent body established by the previous government in 2014. It includes representatives of Kāi Tahu as manawhenua, commercial and recreational fishers, tourism, science, the environmental sector, and the broader community. The 2 final options were arrived at after exhaustive consideration of 20 possible locations. Noting the enormous commitment each forum member on behalf of iwi, stakeholders and other community interests, Ms Galloway said: “This process has been part of Forum members’ lives for three and a half years. Each member, past and present, deserves recognition and huge thanks for their efforts.”

The Ministers said it was not yet clear what steps would be needed if new marine protections are required for the South Island’s south east coast. Before any changes are made to existing protections, they will seek the views of all parties in Parliament and invite public submissions.

Mr Nash noted that both he and Ms Sage are satisfied with the quality of the report and the robust process followed by the Forum. “In the end the report reflects the diverse range of views. We will now carefully consider the Forum’s recommendations,” he said.

Future for important marine habitats one step closer to resolution