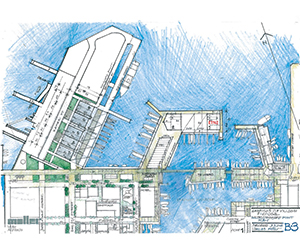 Agreement on the shape of a world class venue for the 36th America’s Cup event in Auckland remains elusive, with a new, fourth option having been tabled.

The latest option known as Point-Halsey, has evolved from suggestions by local residents group. It is by far the cheapest of the four options put forward so far, and envisages only a 9900 square metre extension of the Halsey St Wharf – significantly less intrusion than the other three options, which would have seen intrusions of up to 22,800 square metres. The option being discussed will also bring forward the removal of tank farms on Wynyard Point, creating a positive legacy for Auckland.

Prime Minister Jacinda Ardern, Mr Parker and Mayor Goff have stated they are committed to limiting the intrusion into the harbour, while achieving a word class venue for the Cup event. However, Emirates Team New Zealand (ETNZ) boss Grant Dalton cautioned that Wynyard Wharf tank removal and remedial work are complex and time consuming. “We along, with Government and Council, have concerns about the works timetable and availability of specialist construction resource in an already stretched environment. The government is seeking a second expert opinion on the timetable issue and we support them in doing this….There is little point in agreeing to a plan that can’t be delivered on time”.

Officials are currently working with ETNZ on the design and details of this fourth option, as well as other aspects of the overall event. ETNZ’s Dalton concedes the new option “on the face of it and to the layman’s eye…looks like it could work.”

The four options that have been discussed are:

Minister for Economic Development David Parker says only four double bases are now needed, rather than the six required at the time the hybrid option was announced, and this gives greater flexibility.

A consent application will be lodged for the building of bases on Wynyard Point and the existing Halsey Wharf.

That will sit alongside the council’s earlier application and ensure maximum flexibility.

Option costings: (Note: All information is approximate and subject to final decisions).