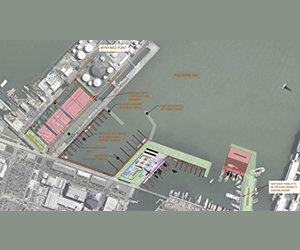 Agreement has been reached in principle between Government and Auckland Council on a final plan developed by Emirates Team New Zealand that will see the 36th America’s Cup be sailed in Auckland in 2021, pending approval by the Auckland Council Governing Body and final sign off by Finance Minister Grant Robertson.

The Emirates Team New Zealand plan essentially eliminates the need for any extension of the Halsey Wharf which brings with it a significant cost reduction and situates the team in the Viaduct Events Centre. One team would then be housed on the extension on Hobson Wharf, while the remainder of the team bases lines up along the Wynyard Wharf.

The government brokered the deal in cooperation with ASB and Stolthaven, driving costs down by more than $50 million. Construction and related costs are estimated to total $212m, with Auckland Council contributing $98.5m.