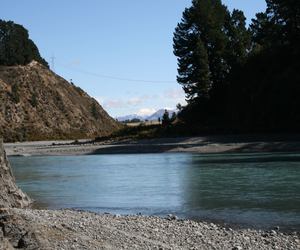 New research from the University of Canterbury has found that a shrinking river is less able to support larger predatory fish, such as the highly-valued sports fish like brown trout or at-risk native fish like galaxiids and eels.

This potentially explains why reductions in habitat size are such a powerful driver of predator loss worldwide, Professor McIntosh says.

“If you make a habitat smaller, for example by taking water out of a river, you shrink the physical dimensions of the space which can reduce the size of predators, such as fish, that live there. When predators are smaller, they are not as efficient in their energy use so the food, such as stream insects, available in the habitat will support fewer and smaller fish,” he says.

Read more on the latest research