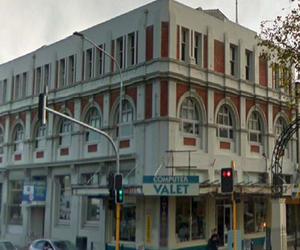 A request for resource consent to demolish the Thain’s Building at 1 Victoria Avenue, Whanganui has been declined.

Karantze Holdings, which owns the heritage building, applied for consent to demolish it after stating it was earthquake prone and would be expensive to strengthen.

Commissioner Rob van Voorthuysen heard the application and submissions on 9-10 August 2018 and advised his decision on 14 August.

He said the building had “undisputed heritage values of regional significance” which contribute economically to Whanganui. He noted the building is highly visible from tourist destinations such as Durie Hill and the Whanganui City Bridge and its demolition would adversely affect the “fabric and symmetry” of the other Victorian-era masonry buildings in the neighbourhood.

The applicant, consent holder or any submitter is able to appeal the decision to the Environment Court within 15 working days from the decision date.