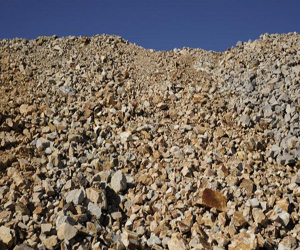 The Government is backing a new venture to mine garnet on the West Coast with a $10 million loan from the Provincial Growth Fund (PGF), Regional Economic Development Minister Shane Jones has announced.

“The Ruatapu Garnet Project will create sustainable jobs and wealth locally, while meeting the region’s goal of diversifying its economy,” Shane Jones said.

“Up to 50 permanent, high-paying jobs will be established through the Ruatapu Garnet Project, as well as boosting support industries like transport and trades in the region.”

The Barton New Zealand Limited (BNZL) mine has support throughout the region, including councils and iwi, and is backed by American firm Barton Mines, which has 140 years’ experience in garnet mining.

“West Coasters know a thing or two about mining and this project will make the most of the range of mining skills and infrastructure that already exists in the region.

“After several years exploring the site, BNZL says the garnet resource here is world class and this mine represents the beginnings of a new industry for the West Coast.

“The West Coast is rich in minerals, giving the region a significant advantage in the mineral sector, so leveraging that strength is central to the region’s Tai Poutini Economic Development Strategy.

“This investment is another example of Government supporting a region to grow sustainably by playing to its strengths,” Shane Jones said.

Alluvial garnet is mainly used as an industrial abrasive – such as water jet cutting or in products like sandpaper. The mineral-bearing sand will be collected using a front-loader digging operation and the garnet will be separated with machinery based at the Ruatapu site.

The project will be developed on privately-owned land in Ruatapu, near Hokitika.

The repayable, interest-bearing loan from the PGF is contingent on Barton NZ Limited successfully completing the Resource Consent and Overseas Investment Office processes.