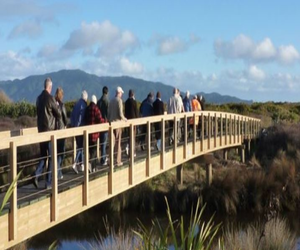 Waikanae River, north of Wellington, has been chosen by DOC as a priority river catchment for restoration from mountains to sea.

The river catchments work is part of the Government’s significant commitment to, and expenditure on, conservation. It will be funded from the $76 million released over four years to DOC to slow the decline in New Zealand’s biodiversity.

“Those programmes have shown the importance of working collaboratively to develop clear restoration visions and actions, and getting work happening on the ground in a way that is underpinned by sound science.”

The river catchments work is focused on improving the ecological integrity and resilience of 14 priority river catchments across New Zealand, to restore them to a healthy functioning state in partnership with others.